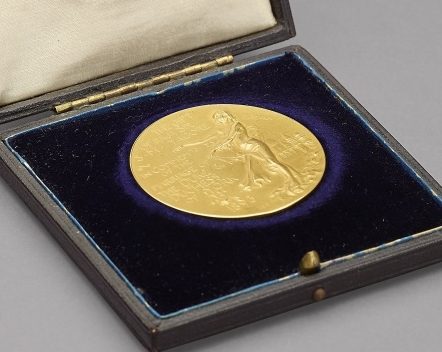 The Royal College of Music received its first major donation of musical instruments in 1884 from Rajah Sir Sourindro Mohun Tagore, a wealthy Indian scholar. Tagore had trained in both Indian and Western music, and made a significant contribution to the comparative study of the two musical traditions. In order to promote the interest in and study of Indian music in other countries, he donated numerous collections of Indian instruments to institutions in North America and Europe. Additionally, Tagore worked to establish an annual award at the College, the Tagore Gold Medal, which is given to ?the most generally deserving pupil(s)?. Although Tagore had hoped that two medals would be available annually to male and female recipients, the limited available funds meant that single medals were awarded to male and female students in alternate years; it was not until 1953 that, as Tagore had wished, it was possible to make two annual presentations. The medal was designed by one of the finest British makers of the period, Frank Bowcher, who later completed the designs of the Great Seals of the United Kingdom, Ireland and Scotland in 1903.